Let’s start this story, well, at the very start…

The earliest experience I can recall relating to a personal computer was looking over the shoulder of a childhood friend whose dad had an elaborate Commodore 64 setup, complete with multiple disk drives, a dot matrix printer, and hordes of floppy disks. Shortly thereafter, possibly talked into it by the same parent (though maybe just a case of trying to “keep up with the Joneses”) my dad brought us home a Commodore VIC-20. We eventually bolstered the old VIC with a tape drive, a dedicated monochrome monitor, and several game cartridges and tapes. While not nearly as nice of a machine as my friend’s C64, that didn’t keep my brother and I from sinking countless hours into playing cartridge games, exploring all of the demos and games we had on tape, and attempting to type in some of the BASIC programs included with the VIC-20’s rather nice user manual (which definitely a challenge as a 5 or 6 year old.) 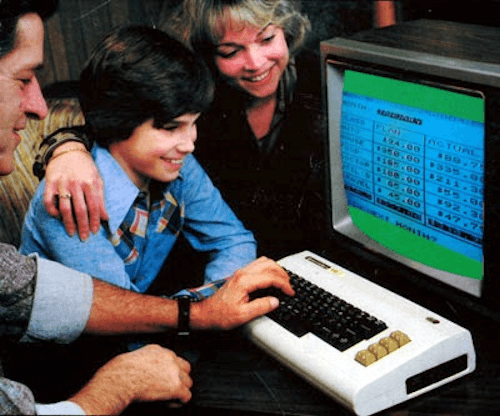 Even after we got a shiny new Nintendo Entertainment System (well after most of my friends had acquired one) I still occasionally dusted off the VIC-20 to aimlessly mess around with it. There was just something… different about a computer that a video game console simply couldn’t approach. Even today it’s hard for me to fully describe, but between the seemingly “deeper” gameplay of computer games, to being confronted with a BASIC prompt the moment you turned so many of those old 8-bit machines on, it seemed like the possibilities were limitless, and my imagination had been effectively seized as a result. This was also still in the era of the arcade, and movies like WarGames and TRON, mind you. Unfortunately my VIC-20 stopped working after awhile, but that only served to help my fascination grow into an obsession.

A recurring theme when I talk about my history with computing, the years following the death of my VIC-20 were filled with attempting to get as much time with and exposure to these ever so exotic video game consoles and personal computers as I possibly could. I’d buy random magazines, read books, and watch any movie that had anything to do with computers and video games. I’d play with the relatively out-of-date Apple IIs, 286 PC clones, and the Apple IIGSes in my school computer labs. If I visited a friend whose parents had a computer or video game console, you’d better bet I’d try to convince them to spend some quality time with me on it. Similarly, I used to sneak time on a family friend’s old Sega Master System. Later the same friend, upon finding out about my love of computers and games, gave me a horde of his old Spectrum magazines which were as bewildering as they were fascinating. I’d go to the showrooms at department stores to drool over their demo PCs and I’d browse catalogs and build out my dream computer setups. With that, my fascination turned into a stubborn goal of obtaining a new computer. Aside from a family friend donating a (unfortunately, broken) Commodore Plus/4 to my cause, I’d have to wait quite a while. 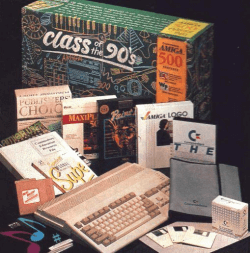 When it comes to Amiga in particular, I recall two specific things that were highly influential to why I’m writing this today. First, a detail that is extremely important is that, despite being an American, I spent many of my more formative years living in the United Kingdom. In the late 80s and early 90s, Amiga, specifically the Amiga 500, was seemingly ubiquitous over there and apparently in many other countries in Europe. It was the machine you’d see when computers were given away to kids on television game shows, and I’d always be there, jealousy watching scenes of teary eyed kids holding massive Amiga boxes over their heads in celebration. A second, more specific memory, was that I ended up randomly buying this January 1990 issue of The One (for 16-bit Games) at the village newsstand, likely motivated exclusively by the pretty pictures inside. Pretty pictures they were indeed – little did I know it, but this magazine was largely devoted to the Amiga and was filled to the brim with articles and advertisements featuring the mind blowingly awesome 16-bit graphics of the machine, the likes of which I’d never seen before that. These graphics were on another level. Aesthetics aside, the games themselves were mostly nothing like what I’d seen in the pages of Nintendo Power or GamePro: I recall seeing ads and articles related to It Came from the Desert, Midwinter, and Space Ace to name just a few. Between all that, I determined that my next computer had to be an Amiga.

Sadly, we moved back to the United States before I ever secured one. While my obsession with computers continued undaunted, the Amiga, not anywhere in any of the local computer shops or department stores, quickly faded as a contender, and eventually, even an option. I bought this single issue of Amiga World before closing that chapter of the saga of my childhood computer obsession for good. Not long after, my parents finally succumbed to my years long campaign of harassment and bought me a reasonably close to top of the line IBM-compatible 486/SX. I only got deeper into all things personal computer from then on, though Amiga wouldn’t be much of a part of any of that outside of being a lingering childhood memory. 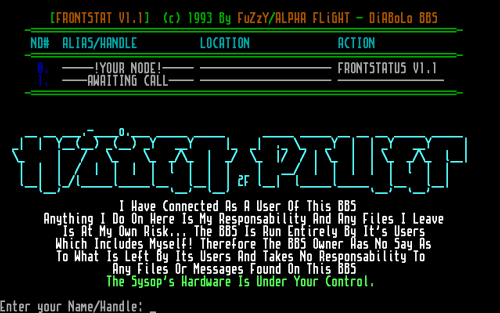 Not entirely though. Pretty much as soon as I acquired a modem I got heavily involved in the PC underground BBS scene which was very much adjacent to and influenced by the Amiga underground BBS, demo, and piracy scenes, and “old school” ASCII art (which is largely Amiga ASCII based) became one of my personal specialties. I also dabbled with tracking via PC programs like Impulse Tracker and enjoyed viewing the occasional PC demo, trying to wrap my head around how some of those effects might have been achieved. So, my appreciation for the Amiga never totally died even if it did take on a new and different light over the years.

This more or less brings us to the present day, and I’m going to finally, some 30 years, dig into the fascinating world of Amiga. I’m going to be using the “Amiga” tag almost exclusively to document every step of my journey to some degree. While a lot of the details may be fairly uninteresting to Amiga veterans, I hope some of what I discuss here will at least be interesting or perhaps even helpful to others interested in or already involved in going into similar journeys themselves. Stay tuned!

I may dive more into the above two magazines in later articles, but for now I’ve *somehow* figured out exactly which issues they were and linked to full scans of them I discovered on archive.org. Amazing!

—
1. My family and I in the mid 80s. Okay, actually, it’s taken from the cover of the VIC-20 user’s manual…
2. Amiga 500 Class of the 90s pack! In the UK Amigas were sometimes sold in awesome bundles like this one.
3. An example of an Ami/X style underground board, Hidden Power is running Sigma Express with a sweet ASCII by 2Fast.

One thought on “Getting into Amiga – Introduction”