So, I now had an Amiga 500 of my very own, but I only had the computer itself. I’d need a few more things to be able to turn it on, never mind actually use it.

First and foremost, I’d need a power supply. It’s not too difficult to find original Amiga power bricks on eBay despite them often going for quite a bit more than I personally think they’re worth. Regardless, this is one component where I’d prefer to go with something more modern as I’ve read that these 30 odd year old power supplies fail frequently, and I’ve personally seen enough other power supplies fail in my life to absolutely believe those claims. While a failure would most likely just mean having to deal with the expense and inconvenience of hunting down a replacement, I’d rather not risk frying my Amiga or, worse, burning down my house.

Thankfully there are quite a variety of third party power supplies out there that are made specifically for Amigas. Unfortunately none of them come close to matching the Amiga 500’s design, and there’s just something about that original chunky, beige brick that feels essential to the aesthetic of the whole setup. There’s also the question of the quality of these newer power supplies. Obviously, I wouldn’t be doing myself any favors if I ended up buying something that was just as likely to fail after all. Fortunately I stumbled onto a solution that satisfies both of these concerns.

For years Amiga hobbyists have been gutting their dead power bricks and replacing their innards with more modern power supplies, and I stumbled upon someone on eBay who was selling just that. An original Amiga 500 power supply that had been “upgraded” to a Mean Well PT65B. Mean Well is a company that specializes in switching power supplies for a variety of applications, mostly industrial, and several of their models make nearly perfect Amiga power supplies right out of the box. The PT65B should be quieter, cooler, more efficient, and provide me with way more wattage than I’ll ever need regardless of what upgrades I end up throwing its way. I even managed to track down a video of one of the seller’s earlier attempts to build one of these on YouTube. I do have some minor concerns about how well it will handle having too low of a load, but overall I’m quite satisfied with this one.

Next comes the mouse. Amiga mice use the old Atari joystick specification which, despite often using the same DE-9 connector, works entirely differently than serial, so no digging through my PC parts bin for an easy fix, sadly. Again, eBay had a few of the original “tank mouse” style mice that came with the Amiga 500 but there was a surprising amount of competition around those auctions and all of the more reasonably priced ones seemed to disappear right around the time I started searching. While I was determined to have an original Amiga mouse, I wasn’t necessarily all too concerned about which one, and the tank mouse looked like it would be fairly uncomfortable anyway, so I ended up grabbing the cheapest Amiga mouse I could find.

You’d think this would be one of the easiest things on my shopping list, but in my haste I did a bit of a half-ass job researching varieties of Amiga mice and from its appearance and seeing what looked like a genuine Commodore stamp on the bottom of the mouse, I’d assumed this was some variation of Amiga 600/1200/4000 mouse. When it arrived in the mail, I opened it up to give it a good clean and had to scratch my head upon seeing no other signs that it was actually a Commodore mouse. In fact, the more I looked into it, the less sure I was about what I’d actually purchased. I did some digging, and it turns out that this is actually Alfa Data “MegaMouse” and not a genuine Amiga mouse at all. A bit of a bummer that I can rectify sometime in the future, but for now I have something that should work at least.

Next up is the 512KB RAM trapdoor expansion card I mentioned in my last update. The A501 was the first party 512KB RAM expansion most people had, but given that they also included a real time clock with a soldered barrel battery that is prone to leaking everywhere, most people opt to replace them with one of the numerous third party RAM expansion cards these days. Mostly because it was conveniently available from Amiga on The Lake, I ended up with this Kipper2K card which adds an additional 512KB of “slow” RAM to an Amiga 500 (or 1MB to an Amiga 500 Plus) and leaves the real time clock optional. Installing it is simply a matter of inserting it into the “trapdoor” expansion port on the bottom of the A500. Simple and cheap. 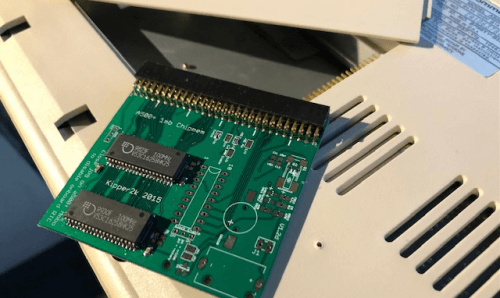 Last but definitely not least, I’d need to worry about how to connect this thing to a monitor. I’d originally mentioned this issue as one of my specific reasons for deciding to not acquire an actual Amiga, and now it was time to face that music.

The Amiga’s horizontal refresh rate is the main problem. I always keep my 486 setup on my desk which includes a 17” CRT monitor, and I’d prefer to use a CRT anyway for authenticity’s sake, but while CRTs typically support a wide range of refresh rates and resolutions, very few go as low as the Amiga’s native 15.75khz horizontal refresh rate. One solution could be to seek out a monitor that does, perhaps an Amiga specific monitor like a Commodore 1084 for instance, but I really don’t need another CRT in my office, and going with a classic model like that would introduce a slew of additional old age concerns to go along with the ones I’ve just avoided with my new power supply.

To use this monitor, or even a newer flat panel monitor for that matter, I’ll need some sort of a “flicker fixer” or “scandoubler” to, well, double that “scan rate” to something my monitor could handle. I knew there were a lot of solutions for connecting Amigas to modern monitors, from internal modifications and open source boards to expensive commercial devices, but what I wasn’t expecting was how unavailable most of them currently are. I have a few models of these things set as “saved searches” on my eBay account that still haven’t shown up once in over a year if that tells you anything. Many of the boards and devices made specifically for Amigas are no longer being produced, and even then, in-depth technical reviews of them usually reveal that few of them are anywhere close to flawless. 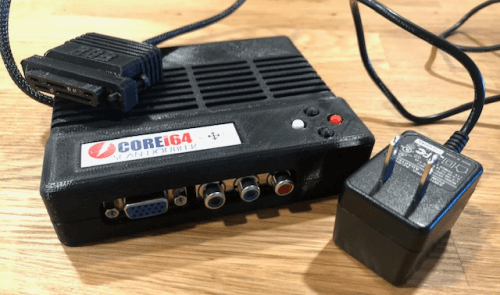 In the end I went with something of a stopgap solution, opting for decent and cheap, and easy to acquire at that, the infamous GBS-8200. I saw quite a lot of people selling these online, not always disclosing what they were, but ended up going with one sold by Corei64 that comes in a nice little case, pre-wired for the Amiga’s RGB port, and pre-programmed for both NTSC and PAL Amiga video modes. How satisfied I’ll be with this remains to be seen, and I’ll definitely be keeping my eyes open for superior solutions.

So with all of that out of the way, does it work? 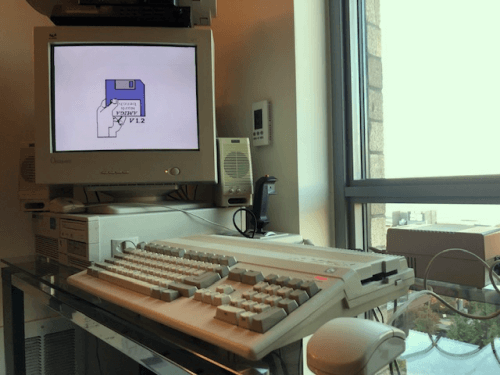 Next time, a couple of big upgrades…

—
1. My sleeper modern PSU. Looks just like the real thing!
2. The mystery mouse. Can you blame me for thinking it was an actual Amiga mouse?
3. Tossing another 512KB RAM into the trapdoor.
4. My GBS-8200 from Corei64 in all its 3D printed glory.
5. I made it to the Kickstart screen! Don’t mind the weird grey void outside, my camera just hated the lighting here.