What’s a good story without an unexpected twist?

After already deciding to go the FPGA route and even placing orders for a MIST and everything I’d need for it (a power supply, some SD cards, and a dedicated USB keyboard and mouse, mainly) a thread about Amiga emulation I’d previously started on Zer0net resulted in Frank (AKA Netsurge of The Diskshop and SciNet) generously offering to send me an NTSC Amiga 500 for the cost of shipping it from Canada. In spite of the numerous reasons I’d concluded that I didn’t want to dive into the deep end of collecting genuine Amiga hardware just yet, how could I possibly pass up what was essentially a free Amiga?

The Amiga 500 might not be the most sought-after model of Amiga, sure, but it is the classic model that most people picture first when they think of an Amiga computer, and really the model that kicked off Amiga’s most successful years. It’s the most common model so there’s a wide array of peripherals, compatible software, and modifications. The Amiga 500 also has the added benefit of not typically needing to be “re-capped” quite as desperately as most other models, which is always a concern when dealing with such old hardware. On top of all of that, it is indeed the Amiga I most pined for as a kid. Of course I accepted Frank’s offer! 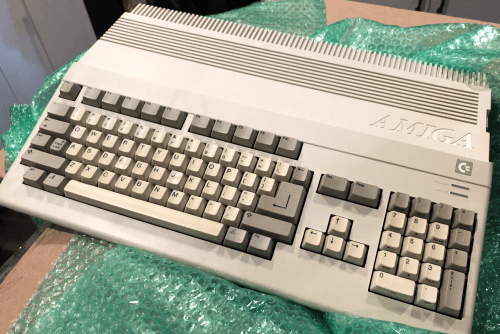 I picked up the package one afternoon after a long day at work and, despite my exhaustion, wasted no time ripping open the box like a kid on Christmas morning. After almost 30 years of wanting one I finally had a Amiga 500 sitting in front of me. Along with the incomparably talented and influential Ungennant agreeing to do the ANSI art for Darkness 2.0, getting my hands on this Amiga 500 was one of the happier moments I’ve had with this hobby in my adult years. I was seriously giddy.

I could immediately tell from the Commodore logo sticker, and verified by the mushy feel of the keyboard, that this wasn’t one of the more sought-after “chicken lips” variations of Amiga 500 with one variety of mechanical keyboard or another, but I really wouldn’t expect Frank to let one of those slip through his fingers so easily. No major damage, and surprisingly it had all of its expansion covers and even all of its rubber feet still intact. Frank hadn’t done much with it yet, though he had tested it, cleaned it up a little, and even used it in an article he wrote about “retrobrighting”. The keys on the keyboard could probably use another round, but overall the machine was in great shape. 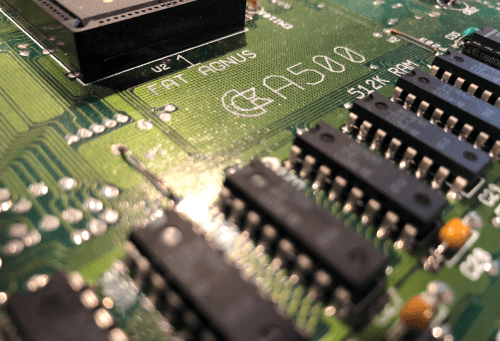 Naturally, the idea of installing some more exotic upgrades, accelerators and the like, had occurred to me, so I wanted to verify the revision of this Amiga as soon as possible to see what my options were. I opened it up and found the inside to be nice and clean with no obvious signs of weird hacks, bulging capacitors, or anything else amiss. According to the printing on the board itself and serial number sticker carelessly slapped on top of it, this Amiga is a revision 5 manufactured in 1988. Good! This shouldn’t pose any compatibility concerns going forward other than some issues with newer Kickstart ROMs (the so-called “oops” bug) which I’m not too concerned with for now.

This is about where you’d expect me to plug it in and turn it on, of course, but the one compromise in acquiring this Amiga (there’s always a compromise!) was that, while it might have been cleaned and freshly retrobrighted, it would arrive lacking a power supply, a mouse, or the 512KB trapdoor memory expansion that most Amiga 500s either came with or were quickly upgraded with. Very minor problems, I think, and given the cost of the computer itself, the price to hunt down these components is easy enough to justify.

—
1. My new Amiga 500, freshly unpacked. Thanks Frank! ❤
2. Getting a little artistic with a shot of the mainboard. Beauty, eh?